My husband and kids couldn't have been more excited when these new Holiday DVDs arrived!  I personally had never heard of 'Twas the Night Before Christmas but my husband fondly remembered it.  Newly released on Blu-ray it was a great movie to get us in the holiday spirit.  The kid's tore into Santa's Magical Stories which includes great classics like  A Miser Brother's Chirstmas and Rudolph and Frosty's Christmas in July.  We also recieved Frosty's Winter Wonderland as well.

Like I said my family was so excited to see the titles.  Nothing like some good Christmas Classics to get you in the mood for the holiday season!  In NJ it snowed on Saturday so it was a perfect match we hunkered down and put on some dvds and sipped hot cocoa!

Here is some additonal information: 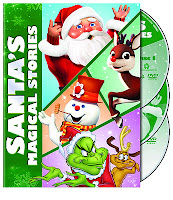 Santa’s Magical Stories is the perfect collection of classic Christmas specials available together for the first time in an all-new gift set. This three-disc release is comprised of eight holiday favorites, including seven beloved Rankin/Bass stop motion animation titles. The release also includes a bonus special. 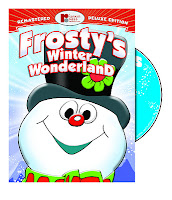 From popular song to animated holiday classic, Frosty’s Winter Wonderland Deluxe Edition tells the story of the beloved snowman and how he meets his companion, Crystal. Andy Griffith, Shelley Winters and Jackie Vernon lend their voices to this captivating cartoon about the Snowman’s return to the children of a small town for a winter season of fun and games. But he’s lonely at night when left by himself and so the town’s children build a beautiful snowlady companion for him. Jealous of the attention given to Frosty, Jack Frost blows up a blizzard and swipes Frosty’s magical, life-giving hat. Only true love can bring Frosty back to his old, fun-loving self. Two songs that have proven to be enduring seasonal favorites highlight the soundtrack: “Frosty the Snowman” and “Winter Wonderland.”

'Twas the Night Before Christmas on Blu-ray : 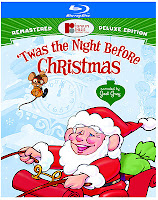 ‘Twas the Night Before Christmas, tells the story about how for some unexplained reason, letters to Santa Claus are being returned to the children of Junctionville. It seems some resident has angered St. Nick, calling Christmas “a fraudulent myth!” Skeptical Albert Mouse has to be brought to his senses “and let up a little on the wonder why.” How Albert is persuaded to change his tune paves the way for Santa’s jolly return to town – and the joyous finale of the animated fable inspired by Clement Moore’s poem and produced by the merrymaking conjurers of Rankin/Bass Studios. The voice talents of Joel Grey, Tammy Grimes, John McGiver and George Gobel make this festive fable even more fun.

So what is your favorite Christmas movie? I love How the Grinch Stole Christmas (which is included on Santa's Magical Stories!)  I am so looking forward to the Christmas season and all the festivities it brings!


Thank you to Warner Home Video Inc, for providing a  copy for review.  Any opinions expressed are my own.  I did not receive any monetary compensation for posting this posting.