Scooby-Doo! 13 Spooky Tales Around the World on DVD!

My kids have been loving this new Scooby-Doo DVD.  It features many of our old favorite episodes.  The Bermuda Triangle episode is a favorite for sure.  Two disc on this DVD make is a great value and 13 full episodes means you get a lot of viewing time. 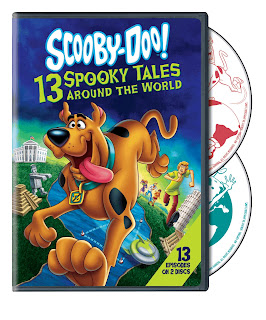 Nobody vacations like Scooby-Doo and the gang! Join Fred, Daphne, Velma, Shaggy and their canine pal in Scooby-Doo! 13 Spooky Tales Around the World as they visit some of the coolest and creepiest destinations across the world. Prepare to get shipwrecked in the Bermuda Triangle with scary skeleton scuba divers and chased through the canals of Venice by the Ghostly Gondolier, who even kidnaps Daphne! Hop aboard a haunted Aztec barge, but not before Scooby-Doo! wows a vengeful god with his best Mexican hat dance – to say nothing of his airplane cha-cha over the headhunter-happy jungles of Brazil. Along the way you can bet the Mystery Inc. gang will get to the bottom of each mystery with plenty of “zoinks!” (the same in every language), plenty of high-jinks, and a whole lot of international cuisine – leaning tower of pizza anyone?

“This collection is a fun ride for both kids and adults as they enjoy a variety of Scooby-Doo! stories from various places around the world,” said Mary Ellen Thomas, WHV Vice President, Marketing of Family & Animation Franchise. She added, “Scooby-Doo always delivers thrilling stories that are mixed with comedy and fun, and appeal to a wide audience. We think consumers will be excited about the almost five hours of spooky fun in Scooby-Doo! 13 Spooky Tales Around the World.”

Scooby-Doo!, the hit franchise follows the adventures of Daphne, Fred, Shaggy, Velma and Scooby-Doo as they travel in their van “The Mystery Machine” and solve cases typically involving ghosts, monsters or other supernatural forces. High-jinks always ensue, with their investigations resulting in entertaining chase scenes mixed with catchy musical numbers and comedic antics. The original television program went on to become one of the most successful animated television programs in history and spawned several spin-off series, specials, consumer products and live action films.

Thanks you to Warner Bros. Home Entertainment for providing a copy for review purposes.  As always the opinions expressed are my own.
Posted by A Rup Life at 12:29 PM