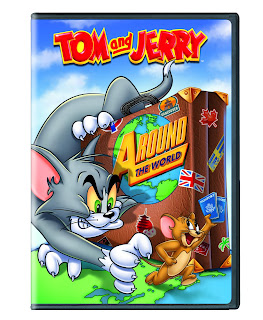 Tom & Jerry Around the World is coming to DVD May 8th.  This DVD features Tom and Jerry and their usual hijinks but out of  their usual environment.


It’s bon voyage for Tom and Jerry as they duke it out as competing street performers in the Big Apple in Way-Off Broadway. Tom chases Jerry through the streets of Naples in Neapolitan Mouse. In Flamenco Fiasco, the dueling duo finds itself in Spain where Tom shows off his fancy footwork as he engages in a very competitive Flamenco dance competition. It’s a trip Down Under in Kangadoofus where Jerry takes refuge with a kangaroo mother and her joeys in an effort to ditch Tom.  In Freaky Tiki, it’s “Aloha” for Tom and Jerry as they relax on a Hawaiian beach and find themselves entering an active volcano where they encounter Pele, the goddess of flames. Next it’s off to Tinseltown where Tom conducts a symphony orchestra in Tom & Jerry in the Hollywood Bowl. These and several other captivating adventures are featured on this must-own release.

While I didn't get to see this one personally my kids grabbed it for their Friday night movie in their room.  My middle son Xan actually stayed up and I had to tell him to go to bed.  I don't think he ever stays up past 9:30 ~ we joke that he is our lightweight when it comes to going to bed! LOL!  The boys liked this title so much that they took it on their vacation with Dad (fishing) too!  If that isn't a testimony I don't know what is!

You can purchase Tom & Jerry Around the World wherever DVDs are sold or get your copy on Amazon.com.

About Warner Bros. Animation
Warner Bros. Animation (WBA) is one of the leading producers of animation in the entertainment industry, with an innovative and talent-rich roster boasting some of the most accomplished writers, producers and artists working today. The studio is on the cutting edge of animation technology, and has both CG and traditionally animated projects in current production and development. In 2010, WBA unveiled three new CG cartoon shorts that feature iconic Looney Tunes characters Wile E. Coyote and Road Runner, rendered in stereoscopic 3D. The films have been released theatrically, attached to Warner Bros. Pictures releases. For television, WBA currently produces The Looney Tunes Show, Young Justice, Batman: The Brave and the Bold, Scooby-Doo! Mystery Incorporated and MAD for Cartoon Network, and will soon launch Green Lantern: The Animated Series, ThunderCats and more. WBA also creates the highly successful series of DC Universe original animated movies for DVD. Producing for multiple platforms including TV, digital and home entertainment both domestically and internationally, WBA is highly respected for its creative and technical excellence, as well as for maintaining the Studio's rich cartoon heritage. It is also the home of the iconic animated characters from the DC Comics, Hanna-Barbera, MGM and Looney Tunes libraries. One of the most-honored animation studios in history, WBA has been honored with six Academy Awards®, 35 Emmy® Awards, the George Foster Peabody Award, an Environmental Media Award, a Parents' Choice Award, the HUMANITAS Prize, two Prism Awards and 20 Annie Awards (honoring excellence in animation).

About Warner Bros. Home Entertainment Group
Warner Bros. Home Entertainment Group brings together Warner Bros. Entertainment's home video, digital distribution, interactive entertainment/videogames, direct-to-DVD production, technical operations and anti-piracy businesses in order to maximize current and next-generation distribution scenarios. WBHEG is responsible for the global distribution of content through DVD, electronic sell-through and VOD, and delivery of theatrical content to wireless and online channels, and is also a significant worldwide publisher for both internal and third party videogame titles.
Posted by A Rup Life at 8:35 AM