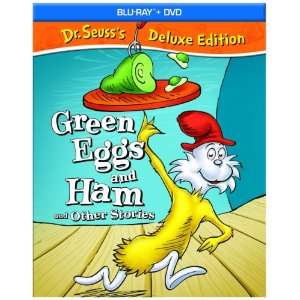 My kids love Dr. Seuss and were super excited to watch Dr. Seuss's Green Eggs and Ham and Other Stories Deluxe Edition on Blu-ray!  My oldest told me it was neat to see the stories come to life.  He particularly loved The Sneetches, he couldn't stop talking about them!

Additional Information:
There’s never a dull moment when the delightfully mischievous Cat in the Hat drops in for a visit. Get set for laughs and good times with one of Dr. Seuss’s most beloved characters when Warner Home Video (WHV) brings the original animated TV special Dr. Seuss’s The Cat in the Hat to DVD & Blu-ray™ on August 7, 2012 in a fully re-mastered deluxe edition set. The classic special will be sold in a standard DVD and Blu-ray™. The Blu-ray™ will include the standard DVD edition of the film for initial ship orders only. The Blu-ray™ will retail for $24.98 SRP and the standard DVD will retail for $19.97 SRP.

While their mother is out on a shopping errand, Dick and Sally are stuck indoors on a dull, rainy day, with nothing to do. Their dreary afternoon, however takes an unexpected turn when they’re paid a visit by a charismatic, six-foot tall, hat-wearing cat, who invites himself in to search for his misplaced “moss-covered, three-handled family gredunza.”

Employing the “Calculatus Eliminatus” method, the children help the Cat in the Hat look for his missing keepsake but in the process, leave the house in a mess. Mr. Krinkelbein, the family’s wise pet goldfish, who in effort to look out for the kids’ best interest, protests the Cat in the Hat’s shenanigans and orders him to leave. The Cat in the Hat however, preoccupied with finding his missing “gredunza,” enlists the help of his best friends, Thing One and Thing Two, to help with the search but the pair only manage to bring the house into further disarray.

Unfazed by the chaos that’s slowly unfolding around them, Dick and Sally are captivated by the Cat in the Hat and his madcap, whimsical ways. They pass the afternoon in sheer delight, singing happy songs and engaging playful mayhem with their uninvited guest. Even the cynical Mr. Krinkelbein is won over by the Cat’s infectious charm. Everyone is having way too much fun to notice the house is a complete mess! That’s until Dick and Sally hear their mother coming home. How in the world will they clean up the enormous mess before she walks through the front door?

The deluxe edition of Dr. Seuss’s The Cat in the Hat includes two additional Dr. Seuss classics Daisy-Head Mayzie and The Hoober-Bloob Highway.

“Dr. Seuss’s The Cat in the Hat is one of Dr. Seuss’s best-known literary works and we’re delighted to bring this timeless classic to consumers in a beautiful, newly remastered edition,” said Mary Ellen Thomas, Vice President Family & Animation Marketing and Partner Brands. She added, “Both kids and adults will be captivated by its whimsical story line, clever dialogue, memorable songs and eye-catching animation. Consumers won’t want to miss out on owning this gorgeous new edition of this dearly loved, family film.”

About Dr. Seuss
Theodor “Seuss” Geisel is quite simply the most beloved children’s book author of all time. Winner of the Pulitzer Prize in 1984, an Academy Award, three Emmy Awards, three Grammy Awards, and three Caldecott Honors, Geisel wrote and illustrated 44 books for children. Hundreds of millions of copies have found their way into homes and hearts around the world. While Theodor Geisel died on September 24, 1991, Dr. Seuss lives on, inspiring generations of children of all ages to explore the joys of reading.

Dr. Suess's Green Eggs and Ham and Other Great Stories Deluxe Edition will be available on June 26th at major retailers or find it online at Amazon.com.
Posted by A Rup Life at 9:30 AM