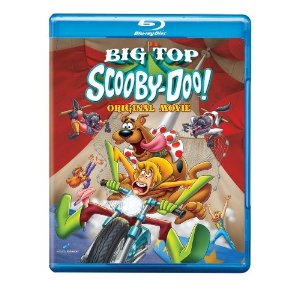 Another great movie from Scooby-Doo!  Big Top Scooby-Doo! is  available on October 9th.  You can pre-order at Amazon.com or wait to grab it in your local store.  I love to do theme movies for each season and Scooby-Doo is perfect to go with Halloween!

Ladies and gentlemen, boys and girls, prepare to be dazzled by the amazing Scooby-Doo in Warner Home Video’s (WHV) all-new animated feature-length movie Big Top Scooby-Doo!, which makes its debut on Blu-ray™ and DVD October 9, 2012. It’s a spectacle consumers won’t want to miss as Scooby and his pals join a circus in an attempt to investigate a series of werewolf sightings. Big Top Scooby-Doo! will be sold in a Blu-ray™ combo pack (includes both the Blu-ray™ and standard DVD and ULTRAVIOLET™ editions of the film), which retails for $24.98 SRP and on standard DVD, which retails for $19.98 SRP (DVD).

When the Brancusi Circus comes to town, Fred — who has always had dreams about performing under the big top — jumps at the opportunity to visit the show. Upon their arrival, Scooby and the gang learn the circus performers have been terrorized by a werewolf who has not only frightened them but has also stolen jewelry from circus spectators. The circus is blamed for the attacks and faces a potential shutdown. Desperate for help, the circus ringleader turns to Scooby-Doo and his pals. To get close to the action, they all go undercover as circus performers: Fred becoming a trapeze artist, Daphne a daring motorcycle stunt driver and Velma a human cannonball. Will they be ready to face a frightening team of circus-themed werewolves?

“Big Top Scooby-Doo! is a full-length, fun-filled adventure the entire family can enjoy together,” said Mary Ellen Thomas, Vice President Family & Animation Marketing and Partner Brands. She added, “Kids love to see Scooby-Doo in exciting new settings, so we put him in this colorful, circus-themed atmosphere where he’s got limitless opportunities to get into all sorts of hilarious predicaments and crazy shenanigans. If you love Scooby-Doo, this a must-have title for your home entertainment library.”

The Blu-ray™ combo pack will include UltraViolet which allows consumers to download and instantly stream the standard definition theatrical version of the film to a wide range of devices including computers and compatible tablets, smartphones, game consoles, Internet-connected TVs and Blu-ray players.*

**Thank You to WHV for providing a product for review.  As always my opinion is entirely my own**
Posted by A Rup Life at 11:38 AM

New comments are not allowed.