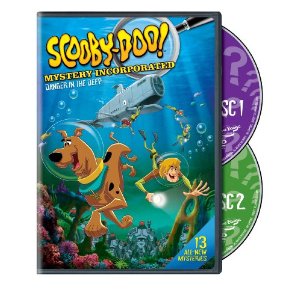 
Captivating new mysteries and intriguing new villains will delight viewers on Warner Bros. Home Entertainment’s DVD release of Scooby-Doo! Mystery Incorporated Season 2 Part 1: Danger in the Deep, available November 13, 2012. The latest incarnation of the popular Scooby-Doo! franchise, Scooby-Doo! Mystery Incorporated follows teenage pals Daphne, Fred, Velma, Shaggy and Scooby-Doo as they investigate strange happenings in their hometown of Crystal Cove. The release will feature 13 episodes from the second season of the hit animated series and will retail for $19.97 SRP.

In Scooby-Doo! Mystery Incorporated Season 2 Part 1: Danger in the Deep, the gang returns to their hometown, Crystal Cove, to solve a series of baffling mysteries. First on the agenda is the elusive Crybaby Clown, who tortures the Cove’s inhabitants and evades Scooby-Doo and the gang’s every attempt to capture him. Velma travels to Russia and comes face-to-face with legendary witch, Baba Yaga. A creature named Dreamweaver begins to haunt people’s dreams. Crystal Cove is attacked by a menacing beast known as the Hodag of Horror. It’s a season filled with engaging mysteries and dramatic developments that’s not to be missed!

“Scooby-Doo! Mystery Incorporated Season 2 Part 1: Danger in the Deep presents fans with a fresh and fun version of the classic cartoon we all know and love. The stories are richer and more complex. The characters show greater depth and personality,” said Mary Ellen Thomas, Vice President Family & Animation Marketing and Partner Brands. She added, “While it’s aimed at kids, adults will find themselves easily wrapped up in both the personal storylines and the unfolding mysteries. If you’re a fan of Scooby-Doo!, this is a must-have for your home entertainment collection.”

The first season finale of Scooby-Doo! Mystery Incorporated was Cartoon Network’s most watched program of the day and ranked #1 with Kids and Girls ages 2-11 and 6-11, while also ranking in the top 3 with all Boys.* Additionally, the animated series’ first season finale delivered over 2.5 million total viewers.*

Scooby-Doo! Mystery Incorporated centers on Fred, Daphne, Velma, Shaggy and Scooby-Doo, who solve mysteries in the spooky town of Crystal Cove, a sleepy coastal village that boasts a long history of ghostly sightings, werewolves and glowing deep sea divers. Because of all the paranormal activity, Crystal Cove has become a tourist hotspot that capitalizes on its haunted reputation — and the gang's meddling is therefore not appreciated by the people of Crystal Cove. Executive produced by Sam Register, Scooby-Doo! Mystery Incorporated draws on the iconic look and feel of the original Scooby-Doo! series and is presented in a modernized visual style created by some of today's leading animation artists.

About Warner Bros. Animation
Warner Bros. Animation (WBA) is one of the leading producers of animation in the entertainment industry, with an innovative and talent-rich roster boasting some of the most accomplished writers, producers and artists working today. The studio is on the cutting edge of animation technology and has both CG and traditionally animated projects in current production and development. For TV, WBA produces series such as Green Lantern: The Animated Series, The Looney Tunes Show, MAD, Scooby-Doo! Mystery Incorporated and Young Justice: Invasion, as well as the forthcoming Beware The Batman and Teen Titans Go! for Cartoon Network. WBA also produces series and additional original content — including animated shorts — for Cartoon Network’s multiplatform branded DC Nation programming block. In addition to TV programming, WBA produces theatrically released CG cartoon shorts featuring iconic Looney Tunes characters, rendered in stereoscopic 3D. WBA also creates the highly successful series of DC Universe Original Animated Movies for DVD. Producing for multiple platforms including TV, digital and home entertainment both domestically and internationally, WBA is highly respected for its creative and technical excellence, as well as for maintaining the Studio’s rich cartoon heritage. It is also the home of the iconic animated characters from the DC Comics, Hanna-Barbera, MGM and Looney Tunes libraries. One of the most-honored animation studios in history, WBA has been honored with six Academy Awards®, 35 Emmy® Awards, the George Foster Peabody Award, an Environmental Media Award, a Parents’ Choice Award, the HUMANITAS Prize, two Prism Awards and 20 Annie Awards (honoring excellence in animation).

Our Thoughts:
My kids love Scooby doo and this DVD was a big hit.  I love having movies on hand for some quiet time at night.  They don't get to watch tv during the day so they look forward to those special times before bed.

This DVD is available at local retailers or online at Amazon!
Posted by A Rup Life at 11:59 AM