*I received a product to help facilitate this review. This post may contain affiliate links that when you click earn me a small percentage.* 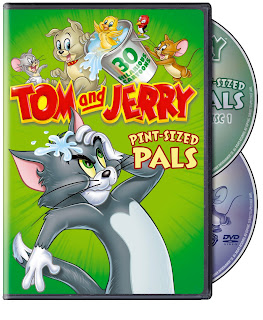 Another great DVD from WHV!  My kids are loving all these classic cartoons!  I have to admit my husband and I chuckle at some of the on screen antics too.  Funny how much we remember from our Saturday morning viewing.

Meet Nibbles, Tuffy, Quacker and Tyke, some of Tom and Jerry’s cutest companions on Warner Bros. Home Entertainment’s (WBHE) release of Tom and Jerry: Pint-Sized Pals, set for release March 5, 2013. This must-own collection showcases 30 hilarious shorts featuring some of the tussling twosome’s most popular pals in a set of hilarious adventures the whole family can enjoy together. The cartoon selection in this collection is comprised of several legendary classics, including an Academy Award®-winning title and a number of contemporary shorts.

That mischievous duo is at it again and their never-ending rivalry is fueled by some of animation’s most adorable characters in Tom and Jerry: Pint-Sized Pals. Spike the bulldog is at his most intimidating when he’s with his precious pup, Tyke. Several adventures featured on this set, including Hic-cup Pup, Pup on a Picnic, That’s My Pup and others, feature the lovable Tyke and his over-protective dad, as they become entangled in Tom and Jerry’s endless pursuit.


Nibbles, the perpetually hungry little mouse, re-emerges in several cartoons including Mice Follies, where Nibbles and Jerry turn the kitchen into an ice-skating rink, and again in The Two Mouseketeers, which won an Academy Award® for Best Short Subject: Cartoons. Tuffy, another precious and precocious little orphaned mouse, is Jerry’s pal throughout a set of Hanna-Barbera-directed classics, including Little School Mouse which is featured on this set.


Another favorite little pal is Quacker, the sweet baby duckling who mistakes Tom for his mother in That’s My Mommy. Quacker appears in several cartoons, including Happy Go Ducky, in which Tom’s Easter egg surprise yields more than he bargained for when it hatches and Quacker emerges. In Southbound Duckling, Quacker is determined to fly south for the winter and in Just Ducky, Jerry teaches Quacker how to swim.


Tom and Jerry: Pint-Sized Pals presents viewers with these and several other hilarious and endearing adventures.


Warner Bros. Animation (WBA) is one of the leading producers of animation in the entertainment industry, with an innovative and talent-rich roster boasting some of the most accomplished writers, producers and artists working today. The studio is on the cutting edge of animation technology and has both CG and traditionally animated projects in current production and development. For TV, WBA produces series such as Green Lantern: The Animated Series, The Looney Tunes Show, MAD, Scooby-Doo! Mystery Incorporated and Young Justice: Invasion, as well as the forthcoming Beware The Batman and Teen Titans Go! for Cartoon Network. WBA also produces series and additional original content — including animated shorts — for Cartoon Network’s multiplatform branded DC Nation programming block. In addition to TV programming, WBA produces theatrically released CG cartoon shorts featuring iconic Looney Tunes characters, rendered in stereoscopic 3D. WBA also creates the highly successful series of DC Universe Original Animated Movies for DVD. Producing for multiple platforms including TV, digital and home entertainment both domestically and internationally, WBA is highly respected for its creative and technical excellence, as well as for maintaining the Studio’s rich cartoon heritage. It is also the home of the iconic animated characters from the DC Comics, Hanna-Barbera, MGM and Looney Tunes libraries. One of the most-honored animation studios in history, WBA has been honored with six Academy Awards®, 35 Emmy® Awards, the George Foster Peabody Award, an Environmental Media Award, a Parents’ Choice Award, the HUMANITAS Prize, two Prism Awards and 20 Annie Awards (honoring excellence in animation).


Warner Bros. Home Entertainment (WBHE) brings together Warner Bros. Entertainment's home video, digital distribution, interactive entertainment, technical operations and anti-piracy businesses in order to maximize current and next-generation distribution scenarios. An industry leader since its inception, WBHE oversees the global distribution of content through packaged goods (Blu-ray Disc™ and DVD) and digital media in the form of electronic sell-through and video-on-demand via cable, satellite, online and mobile channels, and is a significant developer and publisher for console and online video game titles worldwide. WBHE distributes its product through third party retail partners and licensees, as well as directly to consumers through WBShop.com.

TOM and JERRY:  PINT-SIZED PALS is available at your local retailer and online at Amazon!

Thank you to WHV for providing a product to test.  As always all opinions on A Rup Life are my own and individual results may vary!
Posted by A Rup Life at 7:35 PM