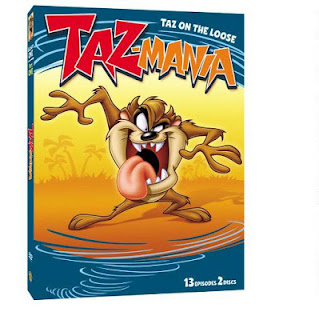 Do you have a favorite Looney Tune?  I have to say I have a soft spot for The Road Runner but Taz is probably a close second!  Did you know there is a new DVD that is all Taz?


Taz-Mania:  Taz On The Loose Season 1 Part 1 is now available on DVD!

Meet Taz, the mischievous teenage Tasmanian Devil who lives on the fictional island of Tazmania with his family and friends on Taz-Mania: Taz On The Loose Season 1 Part 1, available from Warner Bros. Home Entertainment May 14, 2013. This rip-roaring release features 13 episodes of the hilarious Saturday morning cartoon which stars one of Looney Tunes’ most popular, classic characters, The Tasmanian Devil as he sets out on a series of entertaining adventures in the beautiful wilds of Tazmania, where he lives with his mom, dad and two younger siblings. Taz-Mania: Taz On The Loose Season 1 Part 1 will retail for $19.97 SRP.

Clear the way! Here comes Taz, a whirlwind of terror and destruction. He’s a teenage Tasmanian Devil with a voracious appetite who devours nearly everything in his path, even his sister Molly’s beloved New Chips off the Block action figures! Sibling rivalry is tough, especially when you have a little sister who is the typical teenage girl who regularly gets on your nerves. Then there’s little brother Jake, who looks up to Taz and idolizes his big brother.  Mom, Jean, is a dedicated mother who runs a shipshape household and loves her kids. Hugh is Taz’s easy-going dad, who enjoys playing golf.  One of Taz’ best friends is his loyal pet, Dog the Turtle, a turtle who behaves just like a dog and even enjoys playing fetch! Together, the close-knit family of Tasmanian Devils, live on the lush, exotic island of Tazmania, where the sky is always a vibrant shade of yellow and adventures abound. Joining them is a lively cast of characters including, Constance Koala, Daniel and Timothy Platypus, Digeri Dingo, Wendal T. Wolf, Mr. Thickley and many others.

In Taz-Mania: Taz On The Loose Season 1 Part 1, Taz finds himself in an assortment of entertaining escapades. Viewers learn the story of how Taz first met his loyal and beloved pet, Dog the Turtle. Taz is persuaded by the devious Digeri Dingo to look for a sunken treasure, even though Taz hates the water! When Jean and Hugh go visit grandmother who is feeling under the weather, Taz is left home alone without parental supervision with his little brother and sister. These and several other adventures are featured on the DVD.

“Taz-Mania: Taz On The Loose is the perfect animated title for the whole family to watch together,” said Mary Ellen Thomas, Vice President Family & Animation and Partner Brands Marketing.  She added, “Each episode is filled with clever jokes for adults to enjoy and entertaining adventures that are sure to capture kids’ imaginations. Combine this with gorgeous animation and you’ve got a terrific Looney Tunes release you won’t want to miss.”

Taz-Mania originally premiered in 1991 on Fox Kids and ran through 1995.

Taz-Mania: Taz On The Loose Season 1 Part 1 is available at your local retailers and online at Amazon!
Posted by A Rup Life at 9:35 PM