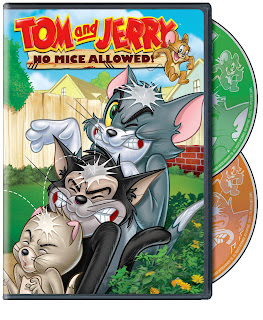 
My kids have a Tom and Jerry addiction!  Well not really but they sure do crack up at the on screen antics!  They were excited to be official 'reviewers' of this title!

The claws are out and the fur and fun are about to fly in Tom and Jerry: No Mice Allowed! Everyone’s favorite mouse pal, Jerry, is outnumbered as Tom is joined by a legion of his catty friends in this two-disc set of 30 cartoon classics.  Family members of all ages will laugh out loud at the timeless antics of this mischievous duo, whether the four-footed guest star is a Smitten Kitten, Timid Tabby or even a 24 Karat Kat. It’s three hours of adventures and purr-fect entertainment in this all-new collection!

Featuring a collection of classic theatricals and contemporary TV shorts, Tom and Jerry: No Mice Allowed! offers something for every member of family. In Smitten Kitten, Tom falls head over heels over a lady feline named Toots. When little Nancy wants to play house, Tom is forced to pretend he is her obedient little baby in Baby Puss. It’s two against one when Tom’s scaredy-cat cousin George comes to town in Timid Tabby.  In Jerry’s Cousin, Jerry summons the help of his cousin, aptly named Muscles, to show him how to defend himself against Tom.  Tom tries to win his girlfriend back by building a rocket and flying it to the moon in Spaced Out Cat.  Tom and Jerry face off against Butch and Spike, in Beach Bully Bingo. In Power Tom, Tom sports a female superhero costume while trying to subdue three cat burglars. Tom tries to impress a lady cat with his singing and guitar playing on Kitty Cat Blues. These and several other exciting cartoons await Tom and Jerry fans on this must-own release.

“Tom and Jerry: No Mice Allowed!  is a wonderfully varied set loaded with 30 great shorts that will keep kids and adults entertained for hours,” said Mary Ellen Thomas, Vice President Family & Animation and Partner Brands Marketing. She added, “For anyone who enjoys owning great cartoons, this is a not to be missed collection. It offers something for every viewer. We are delighted to offer such an extensive Tom and Jerry title.”

Originally created by William Hanna and Joseph Barbera, Tom and Jerry emerged during Hollywood’s golden age of animation and became one of the most popular cartoon series in existence. The shorts focus on the never-ending rivalry between Tom the cat and Jerry the mouse. The plots of each short usually center on Tom’s attempts to capture Jerry. Jerry however, is clever and quick on his feet so Tom hardly ever manages to catch him.


This DVD was a great addition to the boy's movie night.  It has become a tradition to have movies and popcorn several nights a month now.  They particularly love the living room setting since the AC gets very cold in there!  HA!


You can purchase your copy of Tom and Jerry:  No Mice Allowed at your local stores or online at Amazon.
Posted by A Rup Life at 12:07 PM