A Rup Life was provided a copy for review purposes.  This post contains affiliate links. 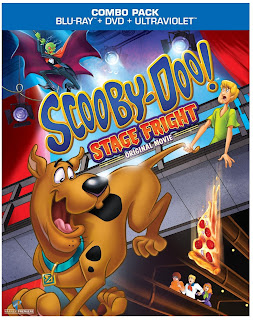 Scooby-Doo is back with a ALL NEW adventure in  Scooby-Doo! Stage Fright!

It’s a show-stopping performance you won’t want to miss on Scooby-Doo! Stage Fright, the all-new animated feature-length movie making its big debut on Blu-ray™ and DVD, August 20, 2013 from Warner Bros. Home Entertainment (WBHE) and produced by Warner Bros. Animation. Join the Scooby and the Mystery Inc. gang as they try to raise the curtain on a ghostly mystery that’s haunting a creepy opera house, which happens to be the home of a popular, hit TV talent show. Scooby-Doo! Stage Fright will be sold in a Blu-ray combo pack (including the Blu-ray, standard DVD and UltraViolet™ editions of the film), which retails for $24.98 SRP and on standard DVD, which retails for $19.98 SRP (DVD).

It’s an exciting trip to Chicago for Scooby, Shaggy and the Mystery Inc. crew when two of their own, songwriting duo Fred and Daphne, are finalists in the hit TV show, Talent Star. Not to be left out, Scooby and Shaggy have a secret act in the works, which they are betting will take the contest by storm.  Unluckily for everyone, the competition is frightful — the show is broadcast from an opera house with a history of horrors and a particularly vengeful phantom that has cursed the show’s production. From costume changin’ chases to creepy clues, the show must go on.  With a natural talent like Scooby-Doo on the case, you can be sure that the laughs, thrills and hijinks are always first place!

“We are constantly challenged to find fresh and exciting new adventures for Scooby and the gang. Scooby-Doo! Stage Fright, with its TV Talent Show setting, really delivers on a spookily fun tale that appeals to Scooby-Doo fans young and old,” said Mary Ellen Thomas, Vice President Family & Animation Marketing and Partner Brands. She added, “We think fans will have a lot of fun with this new title. It has something for everyone…perfect for a family movie night.”
The Blu-ray™ combo pack will include UltraViolet which allows consumers to download and instantly stream the standard definition theatrical version of the film to a wide range of devices, including computers and compatible tablets, smartphones, game consoles, Internet-connected TVs and Blu-ray players.*

This was another hit for movie night!  My kids always giggle along with scooby and shaggy!

Scooby-Doo! Stage Fright is available at your local retailers and online at Amazon!
Posted by A Rup Life at 9:46 PM