Thank you to  Warner Bros. Home Entertainment, Inc. for providing a copy for review.  This post contains affiliate links. 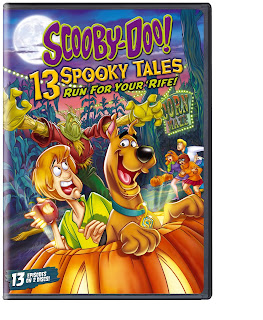 Scooby-Doo! 13 Spooky Tales Run for Your ‘Rife! will be released on 9/10/13!  If your kids are like mine they love Scooby-Doo!  They love watching the antics of Scooby and Shaggy (they are my personal favorites too!!!


Scooby-Doo! 13 Spooky Tales Run for Your ‘Rife! is available at most local retailers and online at Amazon.

“We’re delighted to debut an all-new 22-minute Scooby-Doo mystery in this wonderful collection comprised of memorable cartoon fan favorites,” said Mary Ellen Thomas, Vice President Family & Animation and Partner Brands Marketing. She added, “These cartoons are a perfect way to celebrate the arrival of Halloween. We’re pleased to offer this release in time to celebrate one of the year’s most fun holidays.”


Warner Bros. Animation (WBA) is one of the leading producers of animation in the entertainment industry, with an innovative and talent-rich roster boasting some of the most accomplished writers, producers and artists working today. The studio is on the cutting edge of animation technology and has both CG and traditionally animated projects in current production and development. For TV, WBA produces series such as The Looney Tunes Show, MAD, Teen Titans Go! and the forthcoming Beware The Batman and The Tom and Jerry Show for Cartoon Network. WBA also produces series and additional original content — including animated shorts — for Cartoon Network’s multiplatform branded DC Nation programming block. In addition to TV programming, WBA produces theatrically released CG cartoon shorts featuring iconic Looney Tunes characters, rendered in stereoscopic 3D. WBA also creates the highly successful series of DC Universe Original Animated Movies for DVD. Producing for multiple platforms including TV, digital and home entertainment both domestically and internationally, WBA is highly respected for its creative and technical excellence, as well as for maintaining the Studio’s rich cartoon heritage. It is also the home of the iconic animated characters from the DC Comics, Hanna-Barbera, MGM and Looney Tunes libraries. One of the most-honored animation studios in history, WBA has been honored with six Academy Awards®, 35 Emmy® Awards, the George Foster Peabody Award, an Environmental Media Award, a Parents’ Choice Award, the HUMANITAS Prize, two Prism Awards and 20 Annie Awards (honoring excellence in animation).


Warner Bros. Home Entertainment (WBHE) brings together Warner Bros. Entertainment's home video, digital distribution, interactive entertainment, technical operations and anti-piracy businesses in order to maximize current and next-generation distribution scenarios. An industry leader since its inception, WBHE oversees the global distribution of content through packaged goods (Blu-ray Disc™ and DVD) and digital media in the form of electronic sell-through and video-on-demand via cable, satellite, online and mobile channels, and is a significant developer and publisher for console and online video game titles worldwide. WBHE distributes its product through third party retail partners and licensees, as well as directly to consumers through WBShop.com.
Posted by A Rup Life at 9:00 AM