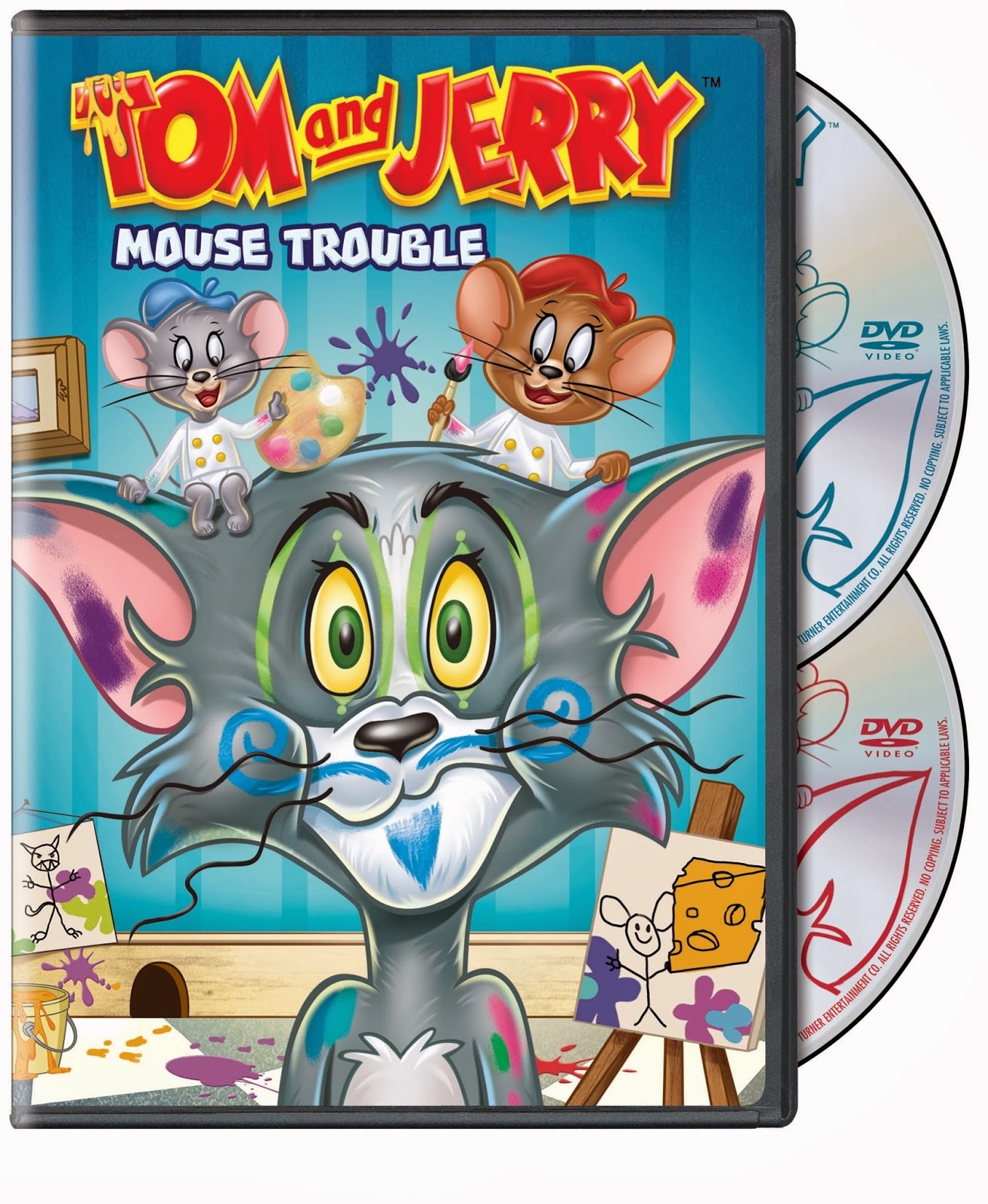 Who doesn't love Tom & Jerry?  These classic characters from my childhood are still a hit today.  My kids enjoy the cartoon as much as I did!  The newest dvd Tom and Jerry:  Mouse Trouble is now available!

About:
Join the favorite cat and mouse duo in Tom and Jerry: Mouse Trouble, a collection of shorts comprised of some of the funniest episodes from Tom and Jerry Tales and classic, theatrical Tom and Jerry shorts. Each cartoon is filled with fur-flying, action-packed chases, schemes and pranks that will delight kids and their parents time and time again. Look at what the cat and mouse dragged in! Included in this all-new, expansive collection is the Academy Award®–winning (Best Short Subject: Cartoon) Mouse Trouble, which has Tom following the ill-fated advice of a book on how to catch mice.  Get ready for a rowdy reunion when Jerry’s Uncle Pecos comes to visit in Cry Uncle. Cat got your tongue? Maybe it’s Cat Got Your Luggage?, the short which has Tom working as a bellhop in a fancy hotel and Jerry is a guest that is sure to overstay his welcome. Then Jerry helps an escaped circus lion in Jerry and the Lion. Tom presents Jerry as a gift to his beautiful feline girlfriend, Toodles Galore in Love Me, Love My Mouse.  These and several other hilarious cartoons are featured on this must-own set. So sit back, relax and hide the frying pans and mousetraps, this one is going to be a laugh riot!

My husband and I had a blast talking about the old episodes we watched as a kid.  We both agreed the one where Jerry's uncle visits is a favorite and guess what it is included in this two disc set a new visit from Uncle Pecos!!  It was awesome to be able to share a memory and a new memory too!  It is a really nice collection of shorts and your sure to find your favorite out of the thirty shorts!

You can purchase your copy at your local retail or online at stores like Amazon.

About Warner Bros. Animation
Warner Bros. Animation (WBA) is one of the leading producers of animation in the entertainment industry, producing and developing both CG and traditionally animated projects for multiple platforms, both domestically and internationally. For TV, WBA produces series such as Beware the Batman and Teen Titans Go!, as well as the forthcoming The Tom and Jerry Show and Mike Tyson Mysteries. WBA also produces original content — including animated shorts — for Cartoon Network’s multiplatform branded DC Nation programming block in the U.S. As the home of the iconic animated characters from the DC Comics, Hanna-Barbera, MGM and Looney Tunes libraries, WBA also produces highly successful animated films — including the DC Universe Animated Original Movies — for DVD. One of the most-honored animation studios in history, WBA has won six Academy Awards®, 35 Emmy® Awards, the George Foster Peabody Award, an Environmental Media Award, a Parents’ Choice Award, the HUMANITAS Prize, two Prism Awards and 20 Annie Awards (honoring excellence in animation).

About Warner Bros. Home Entertainment Inc.
Warner Bros. Home Entertainment (WBHE) brings together Warner Bros. Entertainment's home video, digital distribution and interactive entertainment businesses in order to maximize current and next-generation distribution scenarios. An industry leader since its inception, WBHE oversees the global distribution of content through packaged goods (Blu-ray Disc™ and DVD) and digital media in the form of electronic sell-through and video-on-demand via cable, satellite, online and mobile channels, and is a significant developer and publisher for console and online video game titles worldwide. WBHE distributes its product through third party retail partners and licensees, as well as directly to consumers through WBShop.com and WB Ultra.
Posted by A Rup Life at 7:00 AM