E is for Ecclesiastes #abcblogging 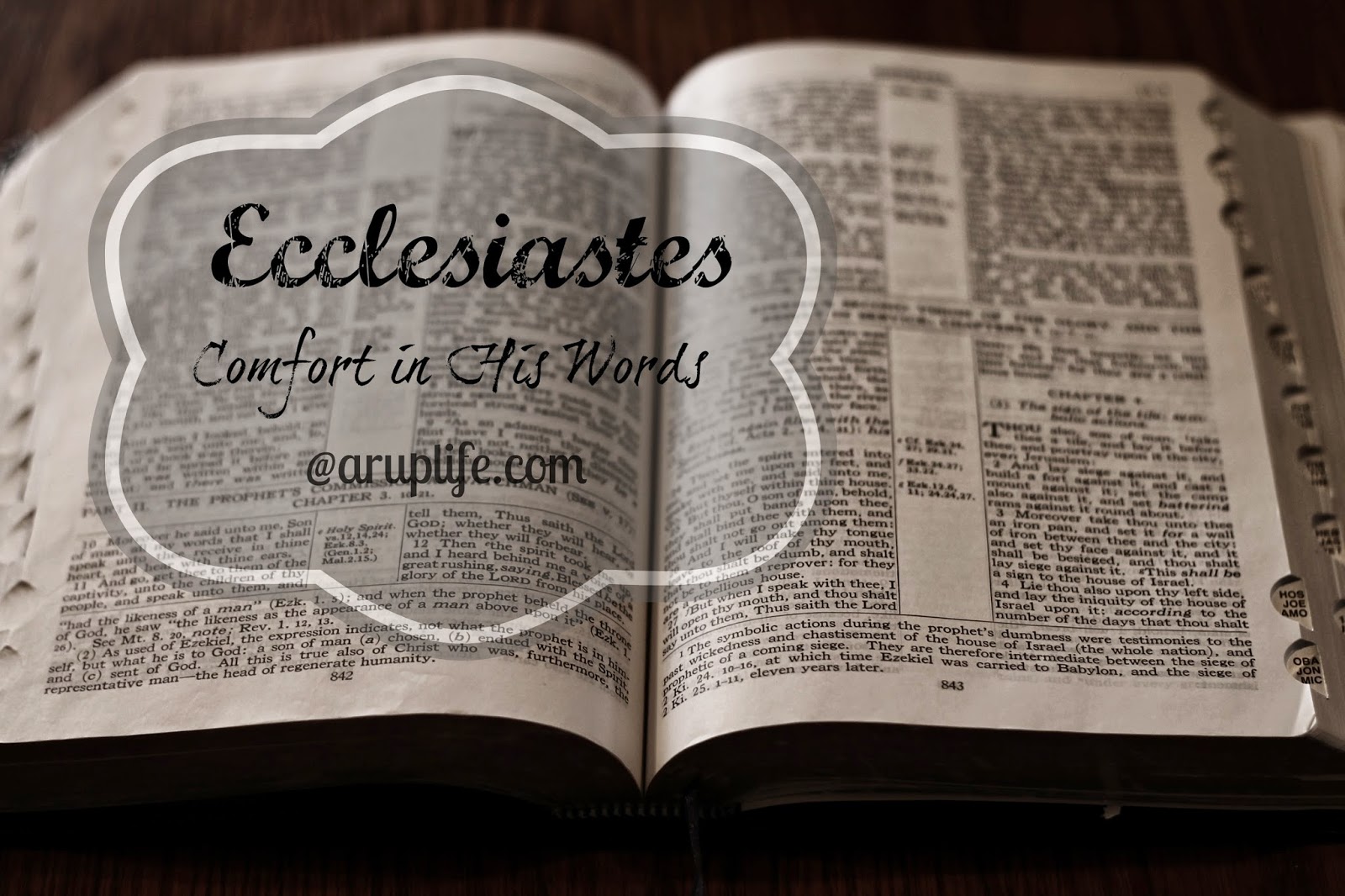 I think my favorite book of the Bible has changed several times.  It is currently Ecclesiastes.  I went through a miscarriage in the fall.  It was VERY unexpected. You see I had been praying for another baby.  It is truly my hearts desire to have another.  There is one tiny snag...well two.  About 4 years ago I had a miscarriage and they found a huge tumor on one of my ovaries.  So they removed that one to be safe.  Then when I had my son I had a tubal ligation.  So while I have one ovary I was technically sterilized.  As you can guess I've regretted that decision but at the time I believed it was the best decision.  I have very scary pregnancies and had had 2 miscarriages on top of the 3 dangerous pregnancies.

So fast forward and last September I had a cycle that wouldn't end.  I'm talking 21+ days.  At the three month mark I took a pregnancy test - I honestly don't know why...I just did.  It was a whim and it guess what it came up positive right away.

It was a whirlwind.  ER visit, blood work, ultrasounds... so much happened in a short two weeks.  We also found out that I was about 8 weeks along and the pregnancy was not progressing at all.  I was devastated.  It felt like the pregnancy was a miracle - surely this one would end up with a beautiful miracle baby in my arms after a equally wonderful pregnancy.

Unfortunately that wasn't the case.  So I sat home and prayed and cried.  A lot.  One of my good friends told me to read Ecclesiastes.  She has known great loss in her life and it brings and has brought great comfort to her.

I read and re-read and continue to read this book.  I have fallen in love with it.  Oh the comfort it brings to me.  Especially chapter 3:

To every thing there is a season, and a time to every purpose under the heaven:
A time to be born, and a time to die; a time to plant, and a time to pluck up that which is planted;
A time to kill, and a time to heal; a time to break down, and a time to build up;
A time to weep, and a time to laugh; a time to mourn, and a time to dance;
A time to cast away stones, and a time to gather stones together; a time to embrace, and a time to refrain from embracing;
A time to get, and a time to lose; a time to keep, and a time to cast away;
A time to rend, and a time to sew; a time to keep silence, and a time to speak;
A time to love, and a time to hate; a time of war, and a time of peace.
What profit hath he that worketh in that wherein he laboureth?
I have seen the travail, which God hath given to the sons of men to be exercised in it.
He hath made every thing beautiful in his time: also he hath set the world in their heart, so that no man can find out the work that God maketh from the beginning to the end.
I know that there is no good in them, but for a man to rejoice, and to do good in his life.
And also that every man should eat and drink, and enjoy the good of all his labour, it is the gift of God.
I know that, whatsoever God doeth, it shall be for ever: nothing can be put to it, nor any thing taken from it: and God doeth it, that men should fear before him.
That which hath been is now; and that which is to be hath already been; and God requireth that which is past.
And moreover I saw under the sun the place of judgment, that wickedness was there; and the place of righteousness, that iniquity was there.
I said in mine heart, God shall judge the righteous and the wicked: for there is a time there for every purpose and for every work.
I said in mine heart concerning the estate of the sons of men, that God might manifest them, and that they might see that they themselves are beasts.
For that which befalleth the sons of men befalleth beasts; even one thing befalleth them: as the one dieth, so dieth the other; yea, they have all one breath; so that a man hath no preeminence above a beast: for all is vanity.
All go unto one place; all are of the dust, and all turn to dust again.
Who knoweth the spirit of man that goeth upward, and the spirit of the beast that goeth downward to the earth?
Wherefore I perceive that there is nothing better, than that a man should rejoice in his own works; for that is his portion: for who shall bring him to see what shall be after him?

I'm not sure if we will every have our miracle baby.  I know God has shown me it is possible but most of all I want HIS will for that area of my life.

This post is part of Blogging through the alphabet with BenandMe.com  Click on the image below to see what others are blogging about for the letter E.