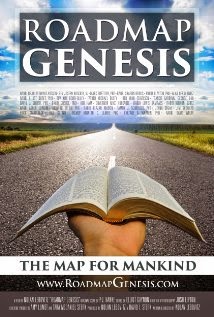 I am really starting to like documentaries.  I like that people tend to take an idea and explore it with public and expert opinions.  Recently, I watched Roadmap Genesis which is a movie that looks at the book of Genesis from the bible.  In this movie filmaker Nolan Lebovitz questions himself and us the viewer about the relevance of the book of Genesis in today's living.


Roadmap Genesis is a film documentary that makes the case that the Book of Genesis is a roadmap containing guideposts on how to live a productive, fruitful, and fulfilling life that will help our society lift itself out of its current decline and return it to prosperity, promise, and accomplishment.


When Filmmaker Nolan Lebovitz found himself at a crossroads in his life, he knew he had to choose between continuing to make the Hollywood suspense thrillers that were his livelihood and trying to make the world a better place for his new young family. After much struggle, he found his answer in the Book of Genesis.


Roadmap Genesis invites Americans of all faiths to engage in a dialogue about the relevance of the Bible in the modern age. Through interviews ranging from Gov. Mike Huckabee of Fox News Channel to Rabbi David Wolpe, from Alan Dershowitz to the Archbishop of Chicago Cardinal Francis George, from Erick Stakelbeck of the Christian Broadcasting Network to Ken Ham of Answers in Genesis and the Creation Museum, and many, many more, Nolan explores the rules that God has set forth to help us maintain a successful and working society.
Connect with Roadmap Genesis at the following social media sites:  FACEBOOK and TWITTER.  You can watch the trailer for this movie here.

I found this film very interesting.  Leibovitz asks some tough questions: What is Genesis, Is it relevant for today's life and how does it impact how you live?  I find it sad both on screen and what I believe to be the majority of America - that most people when asked what is Genesis? - didn't know.  It shows how far as a nation we have strayed from our original foundations.

This movie looks at the beginning of Genesis as well as several other famous stories from the book.  It talks about how in Genesis 1:1 it says:

In the beginning God created the heaven and the earth.

which basically answers the question of what was here before us.  It covers how Adam came about and how we became a many language world.  It discusses the environment and how the bible calls us to care for our land. It challenges the viewer to have compassion on fellow man and work to change our world for the better.  Genesis has so many basic instructions for every day living.

I enjoyed watching this film.  I felt that the speakers chosen as 'experts' were fairly balanced.  It was an interesting take coming from a man of Jewish faith talking about the relevance of the bible today.  I really enjoyed seeing Mike Huckabee on screen.  I felt like his values came across and were closely aligned with mine.

All in all this was an interesting look at the book of Genesis and how it needs a revival in our society.  How more people need to take the time to read and learn about the rich heritage we have.

"Disclosure (in accordance with the FTC’s 16 CFR, Part 255: “Guides Concerning the Use of Endorsements and Testimonials in Advertising”): Many thanks to Propeller Consulting, LLC for providing this prize for the giveaway. Choice of winners and opinions are 100% my own and NOT influenced by monetary compensation. I did receive a sample of the product in exchange for this review and post.
Only one entrant per mailing address, per giveaway. If you have won a prize from our sponsor Propeller / FlyBy Promotions in the last 30 days, you are not eligible to win.  Or if you have won the same prize on another blog, you are not eligible to win it again. Winner is subject to eligibility verification.”
Posted by A Rup Life at 8:00 AM