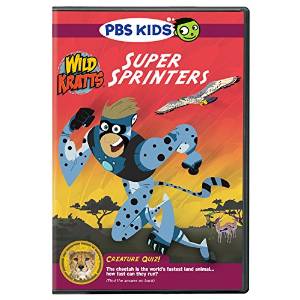 Calling all Wild Kratts fans!  They will be releasing a new DVD tomorrow (6/23/15) called Super Sprinters!  This DVD features to fun episodes with our favorite brothers Chris and Martin!

In each episode of WILD KRATTS, creature teachers Chris Kratt and Martin Kratt take kids and their families along on extraordinary animal-powered adventures. The show transforms the Kratt Brothers, creators of the award-winning KRATTS’ CREATURES and Emmy-winning ZOBOOMAFOO, into animated versions of themselves, allowing the real-life zoologists to visit wild animals in their little-seen habitats and showcase key science concepts along the way. WILD KRATTS airs weekdays on PBS KIDS


“Cheetah Racer”
Chris and Martin announce that no creature or vehicle can travel as fast over the rough and tumble African savannah as the cheetah. Aviva takes the challenge and declares she will build a ground racer that can run even faster than a cheetah. Of course Zach wants to prove that he is a better inventor than Aviva and joins the race. The team, inspired by the cheetah, “revs up” to explore the different functions required for speed to build a cheetah racer and win the race.

“Falcon City”
The Kratt brothers are itching to fly with the world’s fastest animal, the Peregrine falcon, which can hit top speeds of 240 mph. But their efforts are side-tracked when the rest of the Wild Kratts team challenges them to find the falcon in the city instead of in the wild, and Chris’ Creature Power Suit is accidentally activated with Pigeon Powers! But then they discover that Zach is sending his Zachbots to clean off a building that has a Peregrine falcon nest! Martin and Chris must activate their Peregrine falcon powers and harness the force of gravity to pull off a high flying creature rescue!

We loved this DVD.  The Kratt brothers make learning a fun adventure that is perfect for holding my little guy's attention. The combination of live action and cartoon is the perfect blend.  As a Mom, I'm just happy to see him gaining knowledge about animals and the world around him.

You can get your copy of Wild Kratts Super Sprinter's at your local retailer or at stores online like Amazon.