The Bazillions - On The Bright Side CD #REVIEW & #WIN 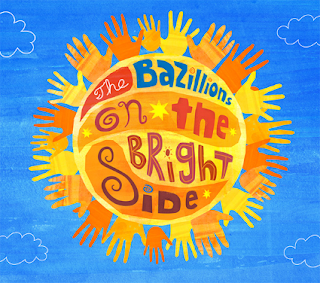 Do you have any songs that bring back those crazy, lazy days of summer?  I've been having a blast listening to The Bazillions album On The Bright Side!  It is exactly what I think of for a beach and summer fun - soundtrack!

Very much inspired by Schoolhouse Rock, The Bazillions have fun musically while helping kids pick up bits of interesting information along the way.  The band successfully walks the fine line that combines first-rate educational aims with outstanding entertainment and musicianship.  Enthused Jeff Bogle of Out With The Kids, "The kindie music world has a fair amount of power alt/rock bands, but the one on the scene that carries forth the sonic crunchiness, killer pop hooks, and vocal clarity of Matthew Sweet is The Bazillions."

On The Bright Side defines the word "bright" on multiple levels, ranging from wacky and hopeful songs describing the life of an elementary school age child to songs that explore the intricacies of grammar.  Moving adroitly from topics like what superheroes do in their spare time to the "best friend" letters Q and U, The Bazillions show influences from The Beatles, The Hollies, Big Star, Fleetwood Mac, and other masters of the world of pop music.  Their songs are essentially story-based.  Even the "educational" songs succeed in presenting narratives and painting pictures for listeners to visualize as they hum along.

I know I mentioned that this is the perfect album to go along with summer but there is a catch!  Some of these songs have some great learning material mixed in!  Use a Contraction is a prefect example - kids will be singing along they won't even realize they are learning grammar!  Parents you will like this album too!  The Bazillions have a sort of Weezer meets Beach Boy feel to their music.  Delightful for my ears and my little's ears!

On The Bright Side is available at iTunes, Amazon, CDBaby, thebazillions.com, and at all The Bazillions' shows.