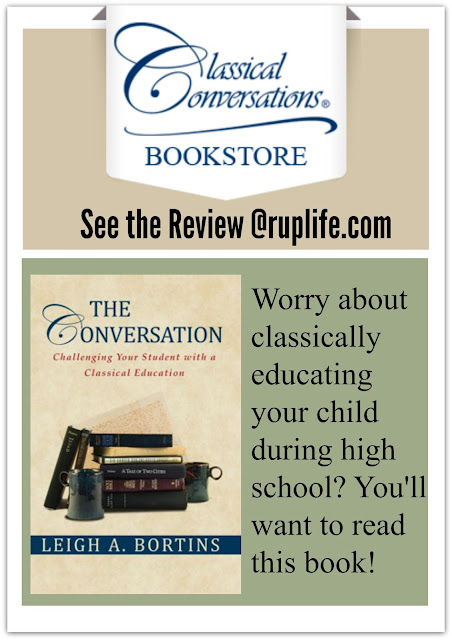 and then this book - The Conversation which deals more specifically with Classical Education in the High School setting or rhetoric stage.  That is not to say you can pick up in the latter years of your child's education, in fact Bortins addresses that... but it is a detailed book on how classical education should look in high school.

Let's back track a little bit!  Classical Education has 3 stages - Grammar, Dialect, and rhetoric.  I'll break it down in my own words - extremely simplified - grammar is memorization, singing songs, vocabulary - all the things you do with your little ones. Dialect is where they ask questions and figure out how things work.  Which leaves us with the Rhetoric stage - which is where they can form arguments based on the facts and understanding they acquired in the first two stages. Basically they put that education to use!

In The Conversation - Bortins goes over the first two stages briefly then dives into the last stage. I have to say this stage has been my biggest fear.  Teaching a preschooler is fairly easy as they have a desire to learn and there is a huge world to show them.  However when kids get to high school there is some pressure to be sure they can pass standard test, get into college, and function as working adults.   It was helpful to read this book as the opening chapter - Confident Parents- as it addressed many of my fears. 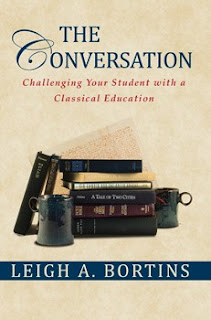 In the book we are taught how rhetoric should look with a simple grid containing 5 Cannons:


Then we are taken to specific subjects in the following chapters:

Each subject is discussed in detail with the 5 Cannons in mind.

I feel like the Classical Education model is somewhat scary at first.  A lot of Latin terms are thrown around and words like Rhetoric and Elocution - are not things we use in every day English (unless your a homeschooler!!).  This book was written with  very thorough details and in a way that made it easy for me to take in as a novice homeschooler.  I felt like I came away with a better grasp and understanding of what the homeschool model for high school looks from a Classical point.  The thing I found priceless were the conversations with students  Bortins shares with us.  There was one in particular about the Scarlett Letter and how she approached the student in conversation for the book.  We had just read that book in our homeschool and I felt like my conversation with my son fit well with what was suggested. Score 1 for this homeschool mom!  I also liked how the Cannon grid was presented with each subject which gave insight on how to further approach the subjects.

Want to see what other reviewers are saying about The Conversation?  Click on the Banner below!