For the past few weeks we have been reviewing  Stinky Kid Math which is an online math program that has courses for foundational algebra (pre-algebra & algebra I), complex algebra (algebra 1 & 2) and geometry.

I received a 6 month online subscription to  Stinky Kid Math  which gave me access to all the lessons, games and worksheets. (This was for ALL the subjects offered)

Who Used It and How We Used It:

We have been having some math struggles for some time with algebra and my oldest.  It frankly just wasn't clicking for him.  We tried two different curriculums to come up with something that worked for him but really he needed something more - possibly even tutoring.  Math is not my strongest subject and I've been working along with him but sometimes he knows more than I remember. We were at a loss to find something that would click with his learning style.

I was really  excited to review Stinky Kid Math because I had hoped this might be the help  we were looking for. We used it as a supplement to his current math program - but started the school year just watching Stinky Kid Math videos and playing the games so that he would have a chance to build some confidence in math again.  We picked a starting place based on where my son felt he struggled and had him begin working through the program on those topics. There was definitely some jumping around because he did know some things but others he needed to re-learn. I personally looked over the topics and we came up with a plan together to figure out where he was lacking and where to work.   He watched quite a few before he felt confident to go back to his regular curriculum. Once he built that confidence we had him work with Stinky Kid Math in addition to his regular math curriculum and that tandem learning has been working well for him.

This really helped! After a few weeks of watching the videos and playing games something just clicked. This is the perfect supplement for my son because he can jump around the videos to the things that are tripping him up and spend some time there. I'm pretty impressed because I had almost thrown in the towel with math all together.  He isn't getting perfect grades with his work but he is getting a better understanding and working on mastery.  That is really what I was looking for and I'm pleased overall.  So for Austin it was a hit.

This program can be used as a full curriculum but that wasn't how we used it or frankly what we were looking for in it.  I don't think I would like that there is no real grade book for parents - if I was using it for a full curriculum.  Right now there is an activity log which shows what you've completed. Which worked fine for us - but I wouldn't have minded a grade book too.

Overall we are pleased and will continue to use this program for the rest of the year to help my son get through his lessons.  At $9.99 a month I think this is a great option for an online tutoring type thing because an in home tutor will charge $10+ an hour to come to your house. 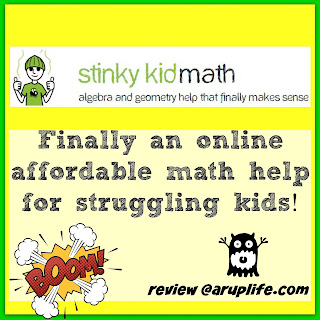 Don't just take my word for it!  See what the other Crew Reviewers are saying about Stinky Kid Math!