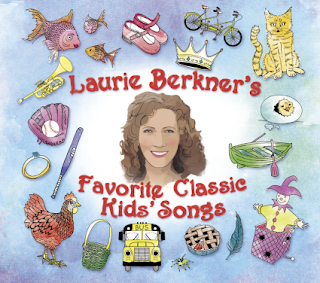 I have a special album to share with you today!   Laurie Berkner's Favorite Classic Kids' Songs!  This album is unique because it is almost all songs you grew up with! Songs like I've Been Working On The Railroad and Open Shut Them!

Says Laurie Berkner, "I grew up with many of these songs, and I'm sure parents and grandparents will remember a lot of them from their own childhoods.  I'm excited about sharing these classics with kids who may not have heard them before and also introducing my versions of songs that might already be family favorites.  In the true folk tradition, I've added some of my own lyrics and my own spin to many of these traditional songs.  I've kept a folk or rock feel for most of the numbers, with a little reggae thrown in here and there for fun!"

Love this album! I listened in the car as we ran back and forth to doctors this past week and my little guy (4) was with me. He kept asking me if we could listen to more. He was just loving it, clapping his hands and singing along. I loved that these were classic songs that every kid should know.  Laurie still puts her spin on each track so you will still hear the sounds you love. This was a big two-disc album with 57 tracks! There are a few songs I didn't know but I liked that. There are also many I did know mixed in so I was singing along to many tracks.  I hadn't heard of I Love My Rooster but it is a new favorite since we have been battling our with our rooster crowing all day long. If your looking for a cd with classic kid songs some upbeat, some slow - this is the only one you'll need!


Laurie Berkner's Favorite Classic Kids' Songs will be available wherever favorite albums are sold, at www.laurieberkner.com, and at all digital retailers, including iTunes, Amazon, Google Play, Spotify, and more.


ARupLife.com received product, press or compensation to facilitate this review. This post may contain affiliate links. We only give our honest opinons of products. This post is in accordance with the FTC 10 CFR, Part 255 concerning the use, endorsements or testimonials in advertising.
Posted by A Rup Life at 8:00 AM