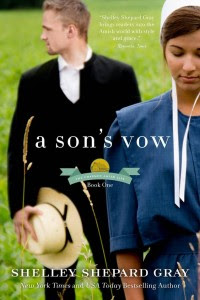 Shelley Shepard Gray has a new series out The Charmed Amish Life. I recently was sent A Son's Vow - the first book in this series to review. I love how Gray weaves several character's lives into a story. In this book Darla Kurtz's father passes in a terrible accident that claims several other lives. The whole town is still mourning and often taking it out on Darla even though it has been several months. Darla takes the world on her own shoulders and has no one to count on. She is strong and independent but is missing out because she keeps all her troubles to herself.  Enter long time friend Lukas who burst back into her life at possibly the best moment. He manages to save the day and gain her trust.

This book has an adorable love story of childhood sweethearts but it also deals with death, coping and healing from loss. Another subtle theme is physical abuse which added an interesting aspect to the story. While I found it odd that no cops were called for any of the abusive incidents - I had to remind myself that it is written from a closed community (Amish) perspective so really outsiders wouldn't be called. The Amish would handle the situation themselves and in the book that is the case. So while I don't agree with that in real life, I understand it as it pertains to this particular story within the Amish Community.  I'm truly looking forward to the next book in this series and I hope some of the characters pop back up. Shelley Shepard Gray sets the scene for several characters to be featured in the next book.


Shelley Shepard Gray's first book in her Charmed Amish Life series is set in the quaint Amish village of Charm, Ohio, and tells the stories of the Kinsinger siblings who are each struggling to find both forgiveness and love in the face of tragedy.
Three months ago, everything changed for Darla Kurtz and her family. Darla's father was responsible for a terrible fire at Charm's lumber mill which killed five Amish men. And though he, too, lost his life, the town of Charm hasn't looked at her family the same since. Even Lukas Kinsinger---with whom Darla used to have a close friendship.
Now her brother's anger at the town is spilling over onto Darla, and she has the bruises to prove it. The accident already cost five lives, but if something doesn't change soon, Darla fears it will cost her---and her family---even more.
Lukas Kinsinger wants to mourn the loss of his father, but he can hardly find the time to breathe. Suddenly the head of his father's lumber mill and responsible for taking care of his three siblings, he's feeling the pressure. He has also never felt more alone---especially with the new tension between he and Darla. But when he learns of her troubles at home, Lukas knows he can't simply stand by and watch. Someone has to help her before another tragedy occurs.
As Lukas and Darla attempt to repair their families, they discover something deeper than friendship growing between them. But will Lukas and Darla's love be accepted after so much loss? Or will the pain of the past overcome any chance of future happiness?


You can purchase A Son's Vow at your local book retailer or at online stores like Amazon.

ARupLife.com received product, press or compensation to facilitate this review. This post may contain affiliate links. We only give our honest opinions of products. This post is in accordance with the FTC 10 CFR, Part 255 concerning the use, endorsements or testimonials in advertising.
Posted by A Rup Life at 8:30 AM