"The Sky Is Falling" - a Chicken Update 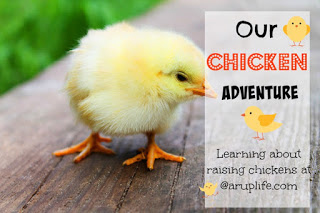 Yesterday was a day. I could say our chickens might have easily said, " The Sky is Falling." Especially our big guy - Roo.  See a neighborhood dog got into our yard. The dog itself was sweet to humans but being a dog he was immediately onto our chicken pen. We heard the chickens squawking and knew something was up. I was feeding the baby so my husband flew outside.

Then the craziness happened. Hubby got the hens in the enclosed part of the coop but the Roo didn't get in.  Some how at one point the dog ended up running through our house then back out to get to the birds. He managed to get a hold of my Roo and shook him up. This is when I came outside and saw my poor man in a heap. I thought he was dead. The dog kept trying to get him.

It was awful. Lots of tears. Screaming (me on the phone with the operator).

I called 911 and while we were waiting our Roo got up and ran around. The dog kept coming until finally we got him locked in the bottom of our coop (girls were above him locked in). Officer came, got dog, did report.

We were sure how bad the rooster was. He was laying around and not his usual mean self. There were feathers everywhere and some blood.

I never felt so helpless trying to save this chicken we had raised from a baby from what appeared to be his end.

We had talked about re-homing him because he can be quite mean.

All day yesterday I was shaken. My heart hurt for my oldest son who is their primary care giver and had to witness so much violence.

My heart hurt for the dog's owner and children who are going to have to re-home their dog now because he is a runner and will keep coming back until he kills each one.

My heart hurts for my Roo who has experienced this terror.

I still can't get the image out of my head of him laying there lifeless.

When the sun came up this morning I was worried. Would he crow? Or would we find he had internal injuries and passed in the night.

Thankfully as the sun came up I sat in my bed and I heard his ROAR! He was awake and doing well. In fact he was pretty much back to his grumpy self.

He has changed a little. A neighbor was walking their dog and Roo freaked out and had to be locked up at that time. I can't say I blame him. It was traumatic

Our Rooster - Roo
He is looking good for almost dying!

Roo with three of his girls enjoying his new block treat!

Two of my boys love sitting and watching the chickens. Often one of the girls comes and sits on a lap or perches on a chair.


ARupLife.com DID NOT receive  product, press or compensation to facilitate this review. This post may contain affiliate links. We only give our honest opinions of products. This post is in accordance with the FTC 10 CFR, Part 255 concerning the use, endorsements or testimonials in advertising.
Posted by A Rup Life at 7:46 PM