My five year old loves to 'play' on the computer. I have considered this a blessing because my bigger kids prefer to do more traditional school work. When my little guy is on the computer it basically frees me up to work with a bigger kid or feed/change the baby.

We received a one year subscription to Read, Write & Type from Talking Fingers Inc. to review. This is an entirely online computer course that focuses on three main areas of learning with exercises in reading, writing and typing. The reading portion incorporates phonics and spelling while the writing/typing portion focuses on keyboarding and word processing.

How we used this program:


My five year old is basically at the beginning of kindergarten. We slowly started focusing his studies in January because he had a late fall birthday and doesn't really start officially until the fall. He is so ready though which made us start slowly this winter. He has some of the basics down with letter recognition and beginning sounds. 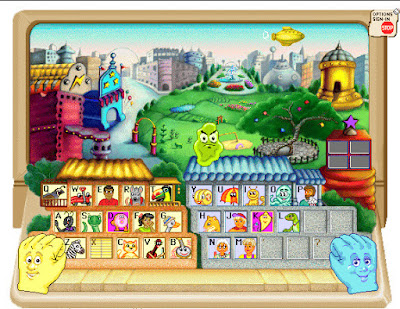 He is at a good place for starting a program like this. All I really did was log him in. Immediately the catchy theme song - I can read, I can write, I can type - plays and J-man is ready to play.  I say play because for him that is what it felt like. He worked through the program having a blast doing it. The program itself is a game format where the child has to unlock letters by doing various activities such as typing the letter in a sequence. Letter -Space - Letter -Space. Jace was able to do the beginning sets pretty easily. He was able to work through the program easily as far as using the computer and following instructions for that. He really because familiar with the keyboard and where letters and the space bar are. I wouldn't say he is typing 20 words per minute but he has begun building typing knowledge which is pretty impressive.

During the course/game-play, you work on unlocking letters and after every 4 letters unlocked (by completing tasks) you earn a certificate.  You would have thought Jace won a new car. Unlocking a certificate was so exciting for him and he would proudly show each of us. He would come and tell us how many certificates he had and how he only had 3 letters, 2 letters or 1 letter left until the next certificate.  Seriously these were a big deal to this 5 year old!

There is a parents/teacher log in that allows you to see the child's progress and how they are doing in an overview for each lesson. This also had links to user manuals to show you how to create your student account and manage it all.  All in all it is well done. My only concern is that at 5 my son didn't know how to spell many of the words as he went along the program and he didn't really do that well grade wise. Of course he has no clue because he is just having fun but I don't feel like he has learned all that he could/should. With the certificate unlocking - making him go back will just be upsetting for him - so I think we will keep him moving forward and after he completes the course we will let him restart. I don't think he will mind one bit since he loves playing.  If my child was older I would set the parameters much higher and not let them move past each level until mastered. So it is not a fault of the program but just a side effect of him being on the younger side of kindergarten and reading. So for now we move forward then we will evaluate how to proceed after completing the course.

As for timing - my child likes to play until he unlocks all 4 letters and receives the certificate. At first this was very doable because the tasks were shorter but after you progress for awhile each letter unlocking takes a bit longer so he isn't quite playing that long. I let him work until he tells me he would like to be done which is typically 20-30 minutes. This seems perfect to me.

I love how excited my child is to use this program. He loves it and ask to do it for school each day. This is certainly a program we will keep using for the rest of the year as I know my child really has enjoyed working with it. I know it is helping my son outside of the program with his reading abilities because I've seen a jump in a big improvement. It is fulfilling that purpose by strengthening his phonic and reading skills through computer play.

Check out what other CREW members thought of Talking Fingers Inc. by clicking on the banner below!