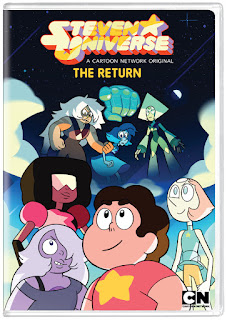 Calling all Steven Universe Fans!  The latest DVD - The Return is now available! Beach City is getting crazier by the episode and there are lots of surprises in store on this DVD.


Steven Universe, with its deeply realized characters and expanding storylines, has received nearly universal praise for its authentic voice, thoughtful animation and standout original music. Lauded by WIRED as one of the 15 Best Shows of 2015, Steven Universe features a stellar voice cast including GRAMMY Award-winner Estelle and BTVA Voice Acting Award-winner Zach Callison. Steven Universe tells the story of three magical defenders of the universe….and Steven, the proverbial "little brother" to the Crystal Gems — a team of magical guardians of humanity.

In addition to being the #1 show in its timeslot last year, beating out all cable and broadcast shows among the Kids 6-11, Kids 9-14 and Boys 6-11 and Boys 9-14 demos, the series is a proven, multi-platform powerhouse.  Its mobile role playing game Attack the Light consistently ranks as a top App in Apple’s App Store, the series is fast-approaching two million Facebook fans, and the franchise is Tumblr’s most re-blogged animated series of 2015.


Steven Universe: The Return is available at your local retailer or online at stores like Amazon.

ARupLife.com received product, press or compensation to facilitate this review. This post may contain affiliate links. We only give our honest opinions of products. This post is in accordance with the FTC 10 CFR, Part 255 concerning the use, endorsements or testimonials in advertising.
Posted by A Rup Life at 11:38 PM