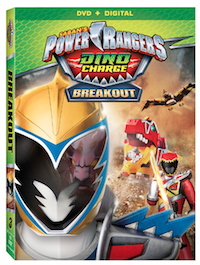 I have a confession to make. I've never seen Power Rangers until just recently.  It took until son number three to have one of the most popular television and toys hit our house. (I guess there is some truth that the more boys I have I'm bound to own EVERY boy toy!)  Of course Power Rangers appeal to both boys and girls but I only know boys in this house. So my five year old was literally jumping for joy when we received Saban's Power Rangers Dino Charge: Breakout for review!


Saban’s Powers Rangers are back in action with Power Rangers Dino Charge: Breakout, arriving on DVD (plus Digital), Digital HD, and On Demand July 12 from Lionsgate. The Red, Black, Blue, Green, and Pink Rangers must once again rely on each other and their new dino-charged powers as they battle to defend the Earth from the villainous Sledge. This all-new Power Rangers series ranked #1 in its time period across all TV with kids 2-11.

The Power Rangers will have to outsmart a puzzling villain, save a prince, and try to defeat Sledge's monsters. When the evil Fury unleashes the powerful Ptera Zord, only the Power Rangers can regain control with the help of their newest ally – the Gold Ranger!

So my little guy ripped this video out of my hands and watched it pretty much immediately. He has a DVD player in his room so he chilled out enjoying himself. For days we have heard all about the Gold Ranger who is featured in this DVD. If you have a Power Ranger fan in your house - they too will love this one!


You can purchase Power Rangers Dino Charge Breakout at your local retailer or online at stores like Amazon.

ARupLife.com received product, press or compensation to facilitate this review. This post may contain affiliate links. We only give our honest opinions of products. This post is in accordance with the FTC 10 CFR, Part 255 concerning the use, endorsements or testimonials in advertising.
Posted by A Rup Life at 10:00 AM