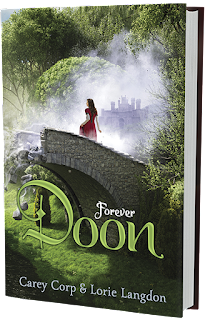 
I've finally finished the last book in the Doon series - Forever Doon! Let me tell you this is the best yet! This story has so much action and the characters grow up a lot with all that is going on. Each of our four main starts - Jamie, Veronica, MacKenna and Duncan have to face their biggest fears and learn that together they are unstoppable against the evil witch. It is a battle and a fight - and there were some sad losses this time but it made for a great read. The Protector gave them the tools to succeed. Seriously, if you haven't embarked on this series - do it, NOW!


With the witch of Doon on the throne, Jamie believed dead, and Duncan and Mackenna trapped in Alloway, Veronica has no choice but to put her grief aside and prepare her remaining followers for the impending battle against the false queen and her forces. But while on a covert mission to steal a powerful elixir from the castle, Veronica discovers her true love may actually be alive, and fighting a battle of his own.
With the Brig o’ Doon destroyed and the portal fragmented, Doon’s forces are not only divided, but also isolated in different dimensions. With the help of a storyteller as ancient as the witch herself, Kenna and Duncan learn they must rebuild the bridge to have any chance of crossing back into Doon with their ragtag army. But when Mackenna insists on fighting as well, Duncan soon realizes the only way he can ensure her safety is to turn her into a cold-hearted killer.
For Vee, Jamie, Kenna, and Duncan, saving their kingdom while keeping their lives intact will take a miracle.

Read my reviews of the first 3 books:


ARupLife.com received product, press or compensation to facilitate this review. This post may contain affiliate links. We only give our honest opinions of products. This post is in accordance with the FTC 10 CFR, Part 255 concerning the use, endorsements or testimonials in advertising.
Posted by A Rup Life at 8:30 AM