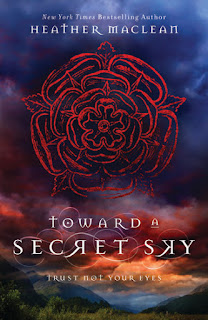 I'm so excited to share with you a new young adult book - perfect for summer reading. This genre is fantasy and has a great new world woven in. I love when stories can take us to another place - if it is done well you will want to visit and  Heather Maclean has done a fantastic job of accomplishing that in Toward a Secret Sky: Trust Not Your Eyes.

In this book Maren has suffered a major tragedy and her whole world is upside down. In the beginning of this book we see a young hurting girl but by the end she has grown and has become very empowered and strong. I love that in a main character, seeing that transformation is one of the things that really made me like this book. The storyline is that of secret societies, angels and demons. It keeps you guessing from the beginning and reveals little bits of information as you go along. You will get to the end with enough of the back story to satisfy but you will want more! Speaking of more... I reached out to author Heather Maclean and asked if there were more books planned and she said YES! I was so happy to hear this because I will be looking for both when they are published. I want to know more about the world and watch Maren experience more.

** SPOILER ALERT:Now to the nitty gritty. Blink books the publisher focuses on clean readings. You can read about that more here -  but the basics are that it might touch on some mature stuff but for the most part it is pretty clean for teens to read. This book has a fantasy aspect that you might want to preview if you steer clear of that kind of stuff - angels/ demons are part of the story line. ( I know many of you are Christians that read my blog and some of you steer clear of any of that kind of thing - feel free to email me if you have any specific questions on the content and I hopefully can steer you. We don't shy away from fantasy in our house but many of my friends do.) **MORE SPOILERS ** There is a scene with drinking but the main character declines.  Light kissing and some 'thinking of kissing' is also talked about.  There is a part where the girl is drugged and almost gets taken advantage of - but it stopped. One of the bad guys is an incubus and wants to take away a character's virginity - it never gets further than being talked about. So you might want to preview or save this for older kids - if you're worried about that. I think most high school students have heard about virginity and if they study any Greek mythology this isn't that far from some of those tales. **


Shortly after 17-year-old Maren Hamilton is orphaned and sent to live with grandparents she’s never met in Scotland, she receives an encrypted journal from her dead mother that makes her and everyone around her a target. It confirms that her parents were employed by a secret, international organization that’s now intent on recruiting her. As Maren works to unravel the clues left behind by her mother, a murderous madness sweeps through the local population, terrorizing her small town. Maren must decide if she’ll continue her parents’ fight or stay behind to save her friends.
With the help of Gavin, an otherworldly mercenary she’s not supposed to fall in love with, and Graham, a charming aristocrat who is entranced with her, Maren races against the clock and around the country from palatial estates with twisted labyrinths to famous cathedrals with booby-trapped subterranean crypts to stay ahead of the enemy and find a cure. Along the way, she discovers the great truth of love: that laying down your life for another isn’t as hard as watching them sacrifice everything for you.


Will you be reading Toward a Secret Sky?