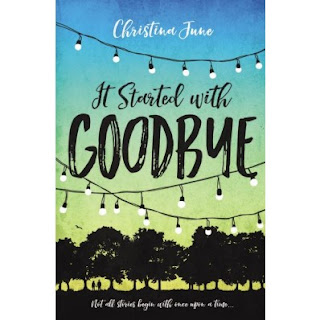 It Started with Goodbye
by Christina June

I remember how hard summer was when I was a teen. It felt like the whole world stopped but at the same time it was moving so fast. From June to the beginning of September was almost a blink of the eye. I worked the most amazing summer job at my family's ice cream stand. I was surrounded by my cousins. We have such sweet memories. However one summer when I was 15 I got into some major trouble. It was a turning point in my life.

See my good friend's parent had decided she wasn't allowed to go out for the weekend. My young and mostly dumb mind decided to help her pull a fast one on her mom by dressing up as my mom and driving another friend's car to pick her up. (She was allowed to come to my house.) Well the major flaw in my plan was that I didn't know how to drive. I got in the friend's car drove maybe 30 feet and hit a parked car. Then I got out and ran! Of course the cops were called and I was on the run. I called my brothers (another stupid move - because I should have called my Dad!) Long story short eventually my dad was called and thankfully I wasn't arrested because I was only a minor and it was a long time ago. (I think in today's time I would have been arrested.) I did have to appear in court and pay a lot of fines as did the friend who let me use his car. That was the worst summer of my life. All I did was work and stay home because I was grounded for the rest of the summer.

Looking back I see that my parents grounding me  and even me getting into that trouble was the best thing that could have happened to me. I made better choices and decisions after that. The following summer I got saved and dedicated my life to the Lord. Those two situations kept me out of a lot of trouble. I'm not proud of how dumb I was as an early teen but I can see how I was on the wrong path back then. Another blessing was that I spent that whole summer hanging out with my mom. I didn't know she would pass away a year and a half later.


Sixteen-year-old Tatum Elsea is bracing for the worst summer of her life. After being falsely accused of a crime, she’s stuck under stepmother-imposed house arrest and her BFF’s gone ghost. Tatum fills her newfound free time with community service by day and working at her covert graphic design business at night, which includes trading emails with a cute cello-playing client. If Tatum is reading his emails right, her virtual Prince Charming is funny, smart, and talented—and he seems to think the same about her. Too bad he’s spending his summer across the ocean in Ireland…not that Tatum would be allowed to go on a date anyway.

But over the course of the summer, Tatum will learn that sometimes going after what you want means breaking all the rules. And when Tatum discovers she’s not the only one in the house keeping secrets, she finds she has the chance to make amends with her family and friends. Equipped with a new perspective, and assisted by her feisty step-abuela-slash-fairy-godmother, Tatum is ready to start fresh and maybe even get her happy ending along the way. A modern play on the Cinderella story arc, Christina June’s IT STARTED WITH GOODBYE will appeal to fans of Sarah Dessen, Stephanie Perkins, and Jennifer E. Smith.


So why did I share that whole crazy story? Well in It Started with Goodbye the led character Tatum has an experience where there is some trouble. She then pays for it all summer just like me. In her case she was way more mature than I every was and I think she learned her lesson much faster than I ever did. This story was refreshing. It brought me through a ton of emotions from feeling sympathy for the main character to being angry about her decisions. I loved watching her grow over the course of the book. I didn't really catch onto the Cinderella story but after reading it and the author's notes I can see how that actually was the case. This is a young adult novel and I think it is perfect for summer reading. I read this book super fast because the story kept me wanting more.

It Started with Goodbye is available at local retailers and online at stores like Zondervan.com.


ARupLife.com received product, press or compensation to facilitate this review. This post may contain affiliate links, which means that by clicking on an affiliate link I may receive a small amount of money. We only give our honest opinions of products. This post is in accordance with the FTC 10 CFR, Part 255 concerning the use, endorsements or testimonials in advertising.
Posted by A Rup Life at 8:00 AM