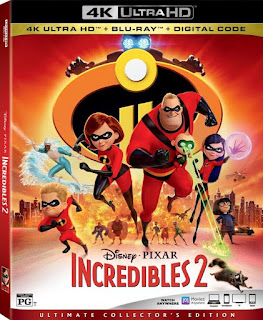 ***
We are super excited about this release. The digital releases early and has some neat bonus material. (I'm sure my kids will be interested in that since the love Frozone.)


Family members of all ages will be hypnotized by hours of delightful entertainment, with never-before-seen “Incredibles 2” bonus material highlighting the beloved characters in the film and the  filmmakers who bring them to life.

Also included are an inside look at the impressive production team at Pixar Animation Studios; documentaries highlighting the film’s relatable characters and stand-out scenes; 10 never-before-revealed scenes; filmmaker commentary; the touching theatrical short “Bao” and a corresponding featurette about how the dumplings sprung to life; and much, much more.

Fans can reunite with this incredible family of Supers instantly on Digital in HD and 4K Ultra HD™ and on Movies Anywhere on Oct. 23, and on Blu-ray 4K Ultra HD,™ Blu-ray,™ DVD and On-Demand on Nov. 6.

ARupLife.com received product, press or compensation to facilitate this review. This post may contain affiliate links, which means that by clicking on an affiliate link I may receive a small amount of money. We only give our honest opinions of products. This post is in accordance with the FTC 10 CFR, Part 255 concerning the use, endorsements or testimonials in advertising. Lisa Rupertus/ A Rup LIfe is a participant in the Amazon Services LLC Associates Program, an affiliate advertising program designed to provide a means for sites to earn advertising fees by advertising and linking to Amazon.com.
Posted by A Rup Life at 12:11 PM