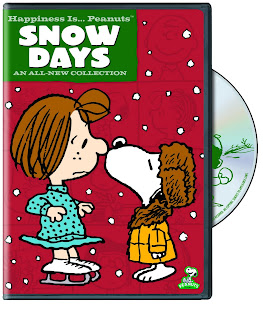 We recently had the opportunity to review the newest title from The Peanuts : “Happiness Is…Peanuts™: Snow Days”.  What a great movie.  We are big Peanut fans and so the kids and I camped out in the living room with our blankets to sit and watch.  The always enjoy Charlie Brown getting tricked so this movie was no exception.  My personal favorite is Snoopy and there is plenty of his goofiness too!  I'm sure your family will love this title as much as mine did!

Here is more information on this title and others coming out:

Happiness is…Peanuts™: Snow Days – The newest Peanuts collection of stories celebrates everyone’s favorite thing about a long chilly winter: snow days! This DVD is comprised of one newly remastered classic Peanuts television special, She’s a Good Skate, Charlie Brown and one episode of The Charlie Brown & Snoopy Show. In She’s a Good Skate, Charlie Brown, Peppermint Patty trains for a figure skating competition with Snoopy as her tough coach, and crafty costume designer. The smiles continue with three short tales from The Charlie Brown & Snoopy Show including: The Play; Sweet Babboo! and Snoopy’s Story. It may get cold outside but the Peanuts kids are sure to bring lots of warmth and happiness into everyone’s homes this winter! Happiness is…Peanuts™: Snow Days will be available in stores October 18, 2011 and will retail for $14.97 SRP.

I Want a Dog for Christmas, Charlie Brown –This special centers on Rerun Van Pelt, Linus’ and Lucy’s lovable and wise-beyond-his-years little brother who wants a dog for Christmas after he sees what a great relationship Charlie Brown and Snoopy share.  The Van Pelts however, don’t think he’s ready or capable to care for a pet yet. Rerun turns to Snoopy for some amusement and holiday cheer.

I Want a Dog for Christmas, Charlie Brown will be available in stores October 2011 and will retail for $19.97 SRP.

A Charlie Brown Christmas – In this Emmy® (for Outstanding Children’s Program in 1966) and Peabody Award winning classic, Charlie Brown is upset by how commercial the Christmas holiday has become. To coax him out of his holiday blues, Lucy suggests he direct the school’s Christmas pageant and decorate a glorious tree.  Charlie Brown concedes. The tree he finds however, is puny, prompting everyone to ridicule him.

A Charlie Brown Christmas will be available in stores October 2011 and will retail for $19.97 SRP.

Charlie Brown’s Christmas Tales – This special, which originally premiered on ABC in 2002, is comprised of a series of delightful animated vignettes, each of which showcase a different member of the Peanuts gang. The DVD also includes the rarely seen Is This Goodbye, Charlie Brown? In this television special, Charlie Brown and pals face the departure of Linus and Lucy, who must move when their father is transferred to a job in another town.

Charlie Brown’s Christmas Tales, will be available in stores October 2011 and will retail for $14.97 SRP.

It’s the Great Pumpkin, Charlie Brown – This Emmy® Award-nominated (in 1967) special, finds the Peanuts gang outfitted in costumes, ready for trick or treating and crashing Violet’s Halloween party. Charlie Brown is in a ghost costume (with more eyeholes cut out than needed), Lucy dressed as a witch and Snoopy in a World War I flying ace costume. Linus decides to steadfastly hold vigil in the pumpkin patch as he awaits the Great Pumpkin.

It’s the Great Pumpkin, Charlie Brown will be available in stores September 2011 and will retail for $19.97 SRP.

A Charlie Brown Thanksgiving – In this Emmy® Award-winning (for Outstanding Individual Achievement in 1974) special, Peppermint Patty invites herself to Charlie Brown’s house for Thanksgiving dinner. Marcie and Franklin are soon added as dinner guests. Charlie Brown admits that his culinary skills are limited to “cold cereal and maybe toast.”  Snoopy and Woodstock transform the ping-pong table in the backyard into a dinner table.   As the guests arrive, they are each served two slices of buttered toast, some pretzel sticks, popcorn and jelly beans. Patty is outraged at the meal and berates Charlie Brown until embarrassed and dejected, he leaves the table and goes back into the house.

A Charlie Brown Thanksgiving will be available in stores September 2011 and will retail for $19.97 SRP.

About Warner Bros. Home Entertainment Group
Warner Bros. Home Entertainment Group brings together Warner Bros. Entertainment's home video, digital distribution, interactive entertainment/videogames, direct-to-DVD production, technical operations and anti-piracy businesses in order to maximize current and next-generation distribution scenarios. WBHEG is responsible for the global distribution of content through DVD, electronic sell-through and VOD, and delivery of theatrical content to wireless and online channels, and is also a significant worldwide publisher for both internal and third party videogame titles.
Posted by A Rup Life at 6:00 AM