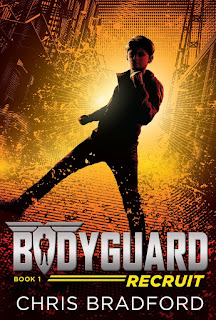 Moms are always asking for recommendations on what their child should read next. It seems that once kids get the bug for reading they devour everything and they are always hungry for me. (Not that far off from us adult readers!) When my teens were around 10 they wanted books to be all about action and adventure. We read some fantastic books like Artemis Fowl and Percy Jackson aloud over those summers. It was some of my best memories. Recently, I was sent 4 books in a new series by Chris Bradford. The series - Bodyguard - follows a young teen Connor on an incredible journey as he becomes a professional bodyguard.

Now I've personally finished the first two books and I was beyond impressed. First off Bradford knows how to write. These books held my attention and honestly this isn't the kind of genre I usually dig. I much prefer fantasy/ Sci-fi. This series had me hooked only a few chapters in. I think it was the attention to detail that sold me.  You learn a lot along with Connor about dangerous situations. Reading about his instincts teaches you, the reader to be more aware of your surroundings. This book had themes that are relevant today it felt like the storyline could have come right off the front page of any current newspaper. I appreciate that the author didn't shy away from current event topics.

Things to note. The first two books did not contain any foul language, or anything that I would flag as parent who monitors what my kids watch/read closely. It was what I'd refer to as a clean read. The story was intense but not over the top or scary. It is for 10 and up but I could see 8 and up enjoying it especially if done as a read aloud. If your kids like spys, action adventure and a bit of mystery - this is the series for them.

About The Series:
A new action-packed spy and adventure series for middle-grade fans of Alex Rider, Jason Bourne, and James Bond--with the first four books to be published simultaneously in paperback!
With the rise of teen stars, the intense media focus on celebrity families, politicians, and a new wave of billionaires, adults are no longer the only target for hostage-taking, blackmail, and assassination - kids are too. That's why they need a bodyguard who blends right in. That's why they need Connor Reeves to protect them.

Recruited into the ranks of a top-secret young bodyguard squad, teenage kickboxing champion Connor Reeves embarks on a rigorous training course, taking lessons in surveillance, anti-ambush exercises, hostage survival and unarmed combat. As the son of a bodyguard who sacrificed his life on the job, Connor is determined to do his father proud and follow in his footsteps.

When the U.S. President summons Connor to protect his impulsive teenage daughter, Connor's training is put to the ultimate test. Connor discovers that the First Daughter, Alicia, doesn't want to be guarded, she just wants to have fun. And with no clue that Connor is her bodyguard, Alicia tries to elude her Secret Service agents and lead Connor astray. But unknown to her, a terrorist sleeper cell has been activated. Its mission: to take the president's daughter hostage.

Combining pulse-pounding action, diabolical enemies, and an insider's knowledge of the tricks of the trade, the BODYGUARD series is the perfect target for fans of Alex Rider, James Bond, and Jason Bourne.
About The Author:
Chris Bradford (www.chrisbradford.co.uk) is a true believer in "practicing what you preach." For his BODYGUARD series, Chris embarked on an intensive close protection course to become a qualified professional bodyguard. His bestselling books, including the Young Samurai series, are published in over 20 languages and have garnered more than 30 children's book award nominations internationally. He is a dedicated supporter of teachers and librarians in their quest to improve literacy skills and provides free Teachers' Guide to his books on his website. He lives in England with his wife and two sons. Follow Chris on Twitter @youngsamurai.


WIN WIN WIN
One lucky reader will win a set of the Bodyguard books!